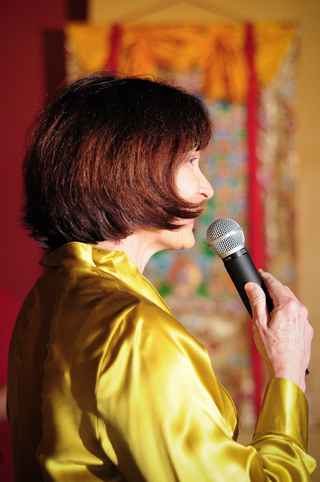 Tags: Marjorie Hudson interviews the author, Getting over myself, my writing process, what matters, Buddhism, how I became a writer, frustration, writers get rejected
Today's post concludes a three-part Q&A series I began a couple of months ago: I requested long-time writing friends to ask me the questions that came to mind when they read A Piece of Sky, A Grain of Rice: A Memoir in Four Meditations. My interviewer for this post is Marjorie Hudson, author of the nonfiction narrative Searching for Virginia Dare and the story collection Accidental Birds of the Carolinas.

MH: How did you become a writer? What has writing brought you in your life?

CH: I only accidentally became a writer, but like many writers, I grew up with a big reading habit. Our little old house was stuffed with books, and I consumed them with the same enthusiasm I consumed candy. Really, those were similarly palliative obsessions. The house was packed full of tension and secrets, too, and curling up in a closet or a tree with a book was a sure-fire, temporary escape. All through my childhood my parents took us children to the public library every week. I checked out as many books as I was allowed and made sure to read them all before the next visit. I started with picture books, of course; I adored Dr. Suess--all that rhyming and lively language rhythm made me giddy. I developed an odd fascination with books that categorized things, especially animals. I devoured big picture books of facts on every breed of dog, cat, horse, chicken--seriously: chickens. At home, I was reading the World Book Encyclopedia cover to cover, a set of 25 volumes from the early 1950s with tiny print and black-and-white photos. I think I wanted to know everything there was to know without quite realizing that was my goal. I was driven to find out whatever I could about my family, too--those secrets, the omnipresent tension--so I read the books they'd read. I kept an eye on the covers of the books piled up beside my father's reading chair and my mother's bedside table--they always read in the evening--but I couldn't make off with their books. Territoriality was important in our house. But nobody stopped me from going through the books my eldest sister had read in college lit courses and left behind on the shelves in the bedroom that had been hers. So, in my elementary school years I read books that mystified and shocked me and went way over my head but left me in a state of wonder about human experience: Pilgrim's Progress, Wuthering Heights, Sister Carrie, My Antonia....

I never imagined becoming a writer. I guess I thought all writers were dead; I mean, I never met one growing up. What I wanted was to know. I wanted to know what went on in the world. I wanted to know why people did what they did. Writing for me began as obsessive journaling about what happened to me and how I felt about it. I tried to explain myself to myself, and I tried to make the world make sense. Looking back, I realize that maybe I was always on the road to being a memoirist, because my writer's impulse was always to dig for meaning rather than to spin tales.

That's what writing has brought to my life: a means by which to try to understand the world and its creatures.

MH: Is there a relationship between Buddhism and writing for you?

CH: Yes, and it's a contentious one. I've been a practicing Buddhist for 21 years now, and at least three times during that span I've given up writing, decisively and entirely, as an obstacle to my path. A Buddhist's role in the world is to do good while at the same time coming to recognize her own mind games--the way habitual ways of thinking and judging distort reality and cause harm to self and others. Given a commitment to Buddhism, is not writing a selfish pursuit? Writing takes time that could otherwise be lavished on partners, children, communities, the world. Or, more concretely put: if I have a daily hour of free time outside of earning a living and caring for family, do I spend it at the writing desk, on the meditation cushion, or doing volunteer work? Examined that way, writing looked like selfishness to me. And plenty of people affirmed that conclusion for me. But each time I gave writing up, something happened that made me have to take it up again. For instance--this is described in my memoir--on one occasion, just as I reached the painful conclusion that I must stop wasting time writing, I was unexpectedly offered a teaching job, in writing, where the publish-or-perish rule meant I had to keep writing, and trying to publish, in order to keep the job, which I very much needed financially at that time. Experiencing the irony of that bind, and later similar ones, eventually led me to see that one of the handful of things I am well-equipped to do in the world--by my nature, my training, and my experience--is to write. So--duh!--writing is a way I can try to do good in the world and it is a tool by which I can work at understanding the nature of my mind. In other words, writing is (or can be) spiritual path.

MH: You write, in your memoir, about the Buddhist concept of attachment. Why is it so important to "let go"?

CH: That's a good thing to talk about, since we're on the subject of Buddhism, because over the years I've noticed that many people confuse the concept of "letting go" with either having no emotions (feeling detached) or always feeling good (feeling no pain). What one lets go of--or tries to--are the mental and emotional constructions one's mind builds around an event or a feeling. For example, consider the writer's experience of rejection. It happens all the time. It hurts. And it's frustrating, because there is no clear answer, usually, to "why." To pretend that the rejection didn't happen, or didn't hurt, or wasn't frustrating--these are constructions of denial that require tremendous, exhausting energy to maintain. An alternative construction is to feel victimized by an unfair system. Yet another is to hate oneself for being a failure. In any case the result is unhappiness--continuing unhappiness added on to the original blow of rejection. If one can "let go" of the denials and the constructions--repeatedly, as often as necessary--then the unhappiness of being endlessly trapped in that delusion is interrupted. Eventually--"time heals all wounds"-- the pain goes away. It goes away sooner if we do not hold on to it. If that process sounds like hard work, it is. And that may be why people get frustrated with Buddhism. It's a road, with potholes, not a panacea.

What Buddhist practice has brought to my life, and my writing life, is some comfort with that truth. I suffer less than I used to when my writing is rejected or misunderstood, or when I am rejected or misunderstood. I do still hurt when these things happen. I am perhaps even more vulnerable to wounding than I once was, because with a memoir in the world, I am more public and less defended. But I do have a frame of reference, in Buddhist practice, for working to de-personalize the blows.

When I am in the position of teaching other writers, I try to offer them this frame of reference. I usually strip away the Buddhist jargon and simply say, focus on process rather than outcome. This is, of course, common advice and very good advice. But in my case, I offer it in hopes that a focus on the joy of process--losing one's self-consciousness inside the beauty and power of language, for instance, or enlarging one's heart by inhabiting a character very different from oneself--will counterbalance, over time, the terrible suffering that so many writers endure when their work is rejected, misunderstood, or overlooked. We all know writers who have died from that suffering.

Write for the sake of writing, not for the elusive, impermanent goal of public affirmation.

MH: In the sections in your memoir that describe Buddhist retreats you often seem frustrated--by imperfect control. Is this what every Buddhist goes through?

CH: Retreats, for me, were ultimately a direct experience of relinquishing control. Like many people, I prefer to feel "in control," so the emotional experience of accepting "imperfect control" was rocky. In most of the retreats I had pretty good control of my body; I did not find it too difficult to stay in a shabby place, to eat simply, to not have internet access, and so forth for the duration of a retreat. I had very little control over my mind, though. It got angry, exhausted, jealous, lazy, or obsessed over things I felt sure did not belong in a spiritual setting. I wanted to have, in retreat, the kind of experience I could label as "spiritual" or "enlightening." Instead, I mostly had experience of boredom, fatigue, doubt and loneliness. I was frustrated because I was disappointed. I wanted one kind of experience and I got another. And both the imperfect control--not getting what I tried to get--and my emotional reaction to that outcome--frustration or disappointment--were very instructive. Such is life, right? We have imperfect control, no matter what we want to have. The retreats were experiential learning in the practice of letting go. But I understood that after the fact. Sometimes long after the fact.

Thanks very much Christine. We were perhaps reading the same set of World Book encyclopedias. My parents bought a set for the seven kids because my dad said that he didn't want to have to settle fights over which TV program everyone was going to watch. But of course we fought over who got which volume of the World Books, because some had better pictures than others.

Your thoughts on the Buddhist approach to living with the process rather than clinging to the results bring a new perspective to writing. I appreciated that throughout the memoir.